The Mad Court of Averland

Herein lies the progress of the army as it grows over the coming months as it is part of the slow grow being conducted (info on this elsewhere on the blog).

The story of Felix Leitdorf:


It wasn't the sodden earth or the dreary grey mist which ruined the slow ride. Rather it was an irritable insect bite on his ankle that sustained his grumbling. Felix had been riding for three days looking for an ideal location to host a hunt for his brothers. So far he had found plenty of marsh birds, tripped over rabbit holes, and been chased out of a thicket by a small feral boar. Not a single sighting of a deer or other appropriately noble target. Fortunately such a miserable task was made intriguing and interesting by its stark contrast to otherwise being couped up with the remainder of the court in Averheim.

A cousin who currently served in his pistoliers detachment had suggested lashing branches to the heads of cows to trick the hunting party into thinking they were deer. After some immediate raucous laughter from his knightly bodyguard the hunting party had halted to rest and give the idea serious consideration. Felix could only fault the plan on needing the hunt to be conducted at night. The superstitious nobles of the court only hunted skirts for bedtime entertainment at night. Still, if they could find a few real deer the herd could be padded out with disguised cattle. In recognition of their cunning plan the pistoliers were now carrying bundles of sticks and branches just in case. The more senior outriders watched on in silent amusement.

Leading his men at a gentle trot, Felix was relieved as the forest started to thin out with large patches of wild flowers growing on the open and sunny ground. This peaceful revelry was rudely broken by the crack of pistol shots. The young and foolish pistoliers had sighted a band of Beastmen gathered around small group of trees, likely resting in the shade. With enthusiasm the pistoliers had opened fire, unleashing a buzz of fire, all of which fell far, far, short. A barked order from the nearby outriders stopped the fire, but the damage had been done. All chance of surprise lost, Felix ordered his pistoliers and outriders to the flanks and formed up his knights to charge the filthy Beastmen.

Advancing with haste the pistoliers and outriders moved into firing positions and started to pick off some of the Beastmen. With care, Felix watched the large horde of short Beastmen pass near a small grove and ordered his knights in a coordinated charge to break them. A tree branch struck on of the knights but the rest arrived in line abreast, crashing into the Ungors. Lances skewered many in the front row. An avalanche of small spears and rocks thrown at the knights unhorsed another two but despite their numbers the Ungors broke from combat, fleeing past the pistoliers waiting to help chase them down. The smaller Ungors dealt with, Felix turned the handful of knights remaining about to hunt down the enemy general lurking in a unit of larger Gor Beastmen.

Brave outriders attempted to delay the Gors while Sir Leitdorf could arrive, however could not withstand the brutal attacks of the Beastmen and were cut down quickly. Time enough was saved to allow Felix a charge into their flank. However, with only a few casualties caused a duel began between a large Beastmen, clearly in charge of the brutes, and Felix. As the duel continued the knights with Felix could not cause enough damage to the Gors to break them. Even another supporting flank charge by the last of the knights could not tip the scales. The duel was as unconvincing as it was painless. Neither Felix or the Beastmen general could hurt the other. In the end with knights slowly dropping, Felix had to order the retreat, and escape to fight another day.

------------------------------
Barely pausing to catch their breath after the battle with the Beastmen, Felix drove his forces onwards towards Averheim to warn his brothers. However, fate was against him. Delayed at a inn with a rather comfortable bed and friendly maids, Felix was caught in a wicked storm. Trying to continue his travels the next day he was set upon by a small coterie of Daemons, seemingly traveling with the storm. Lining up to disperse the vile beings, the men of the Empire were lashed with cruel magic and unstoppable fury as the storm slammed upon them, sending outriders and knights spinning into the dark sky. his army depleted, Felix attempted to run down at least some of the creatures but the paltry few knights at his disposal could not harm the daemonic entities. Fleeing with the last of his knights, Felix took solace in seeing the storm turn upon itself and consume the Daemonic general in charge of the motly host. With haste, Felix fled the area.

Discarding the thought of disguised cattle, Felix wondered if the best way to provide an entertaining hunt to his brothers would be to have them attacked by the marauding warbands that had opposed him so far. His brothers loved to fight, if he could not find deer, the least he could is find a monster to try and kill them. Felix was seventh in line to be heir after all....

-------------------------------
Gathering the remnants of his men, Felix led the way through the blasted forest which had given them so much trouble. Hearing the sound of battle ahead, and the accompanying howls of daemonic storms Felix felt a chance for vengeance. Edging into light scrub forest, Felix saw his daemonic enemies engaged with a small party of High Elves. The Elves, likely to have stolen into the lands of his people through lies and manipulation, had the upper hand and were tearing apart the daemons. Restraining his men from charging, Felix waited for the High Elves to secure their victory of the daemons.

As the last daemon fell, Felix gave the order and the Outriders opened fire, felling a Silverhelm. With a rush the High Elves moved forward to engage their new opponents. With a shout and a cheer, Felix charged with his Knights into the unit of Reavers where he spied a High Elf Sorcerer directing the battle. As the Reavers tried to flee to reposition Felix and his Knights ran them down with lances through their craven backs. Caught up in the enthusiasm, Felix and his Knights were struck in the flank by Dragon Princes and the remaining Silver Helms. In the chaos his Knights struggled to reform to fight the Elf cavalry. Before being dragged off his horse, Felix was able to order the charge of the Outriders and Pistoliers into the fights. Only the Pistoliers made it, with the Outriders forced to flee after their forest killed two of their number. The noble Pistoliers sacrificed themselves and allowed the Knights to reform and begin grind the Elf cavalry to pieces. As the last Dragon Prince fell, cheers from the Knights send the remaining Silverhelms fleeing, however they too were run down by the mighty Knights. It was a good day for the great men of the Empire.

Photos of the Army and Battles: 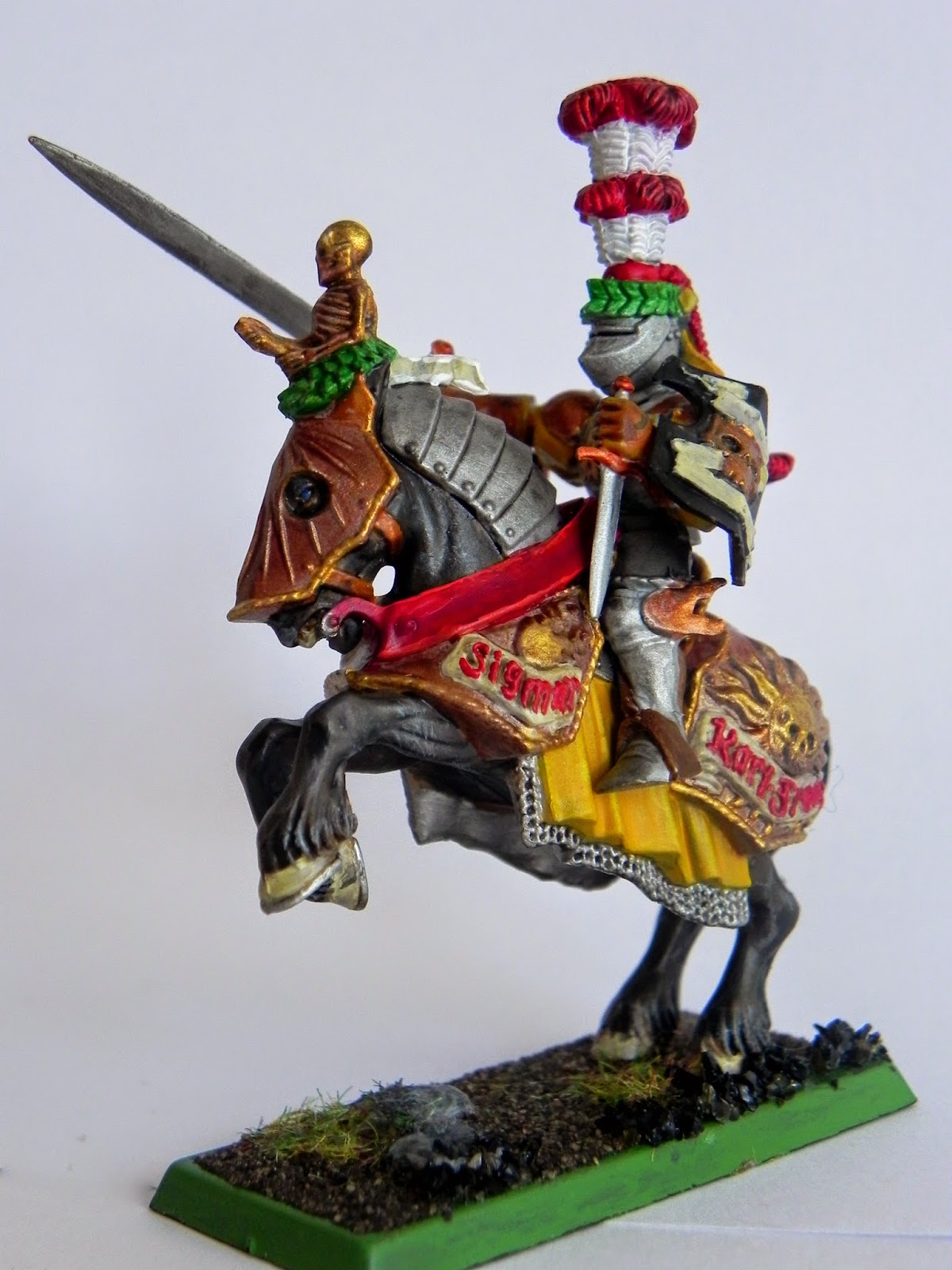 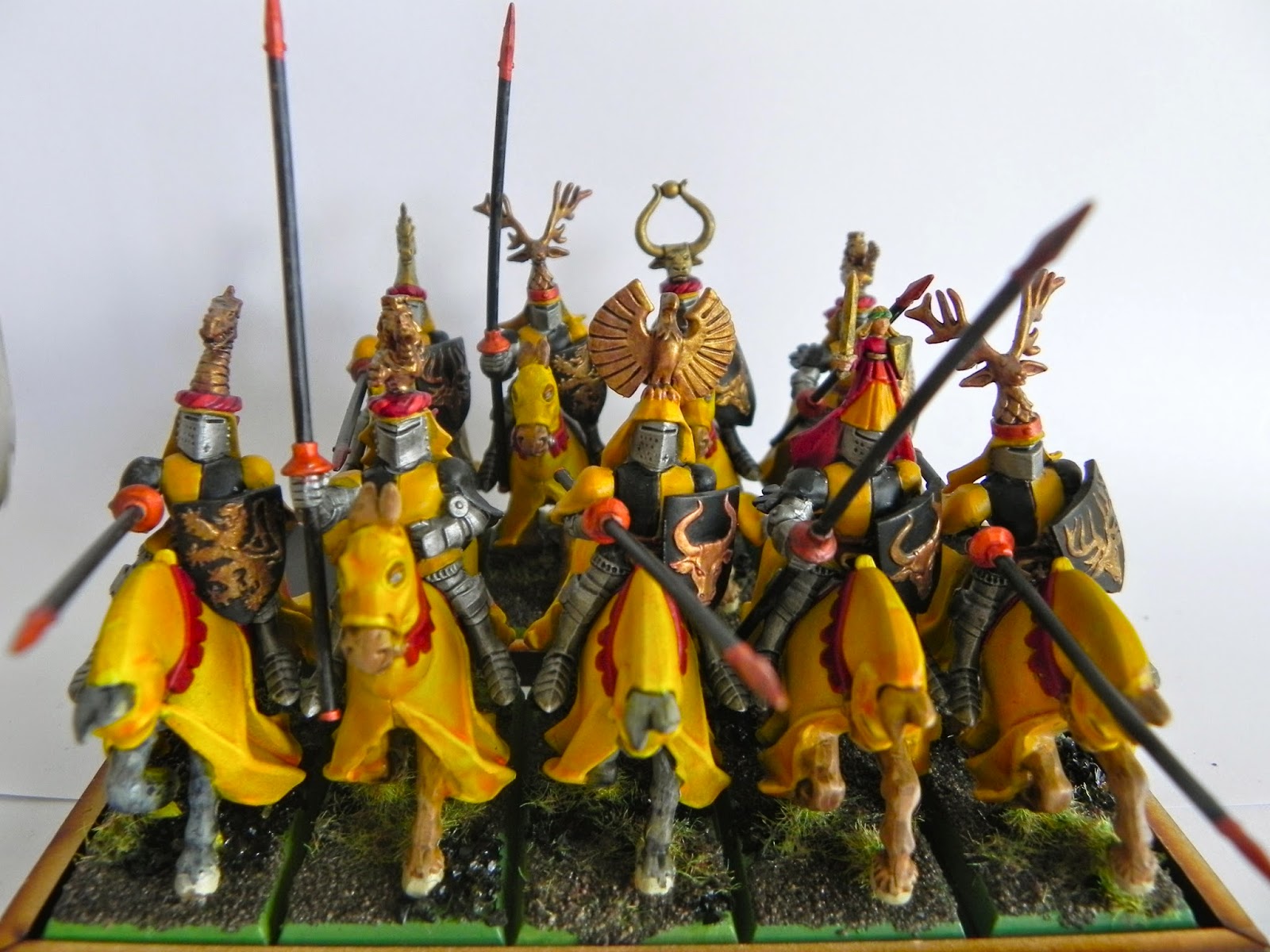 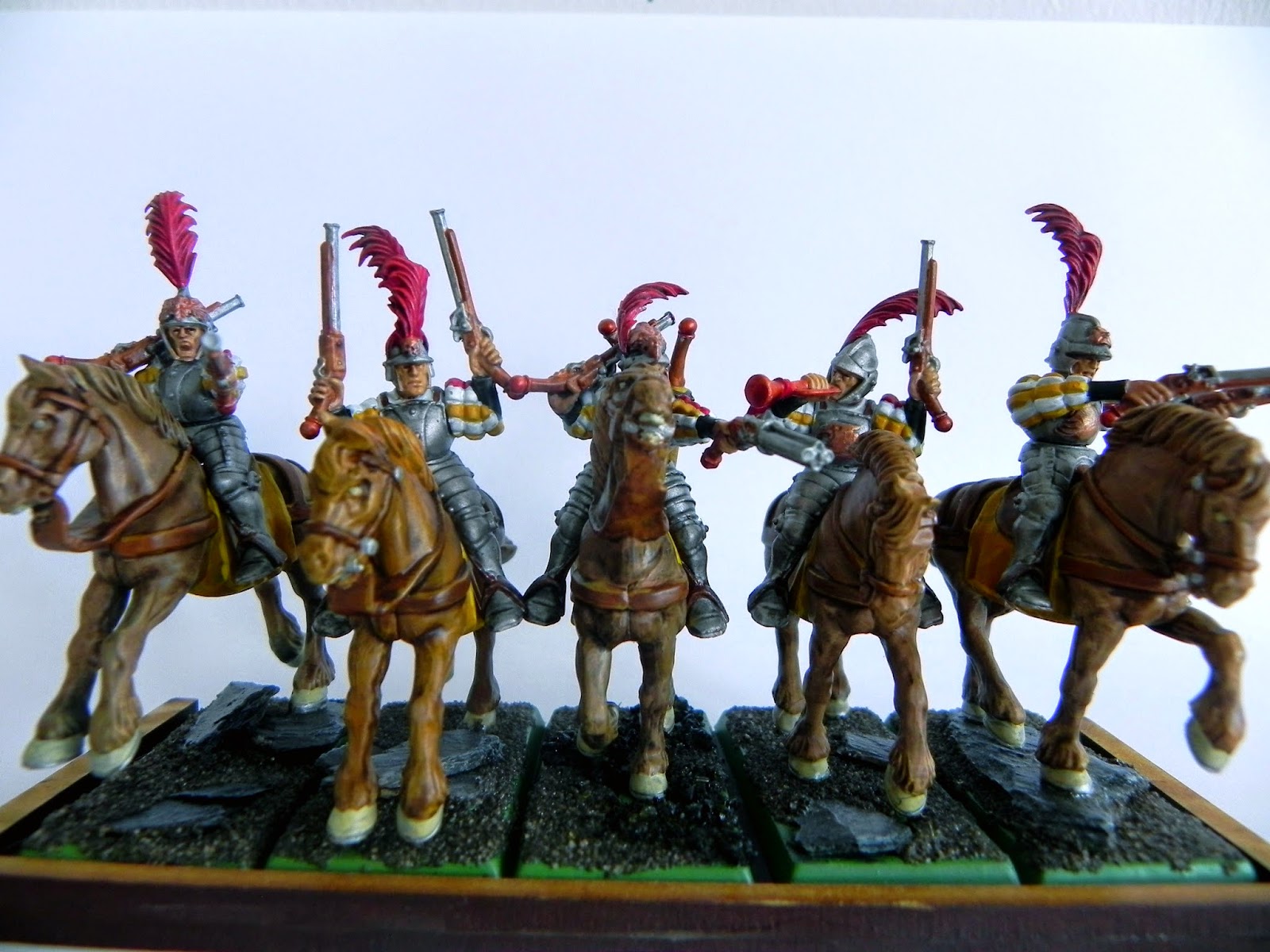 Catch-up on the Outriders: 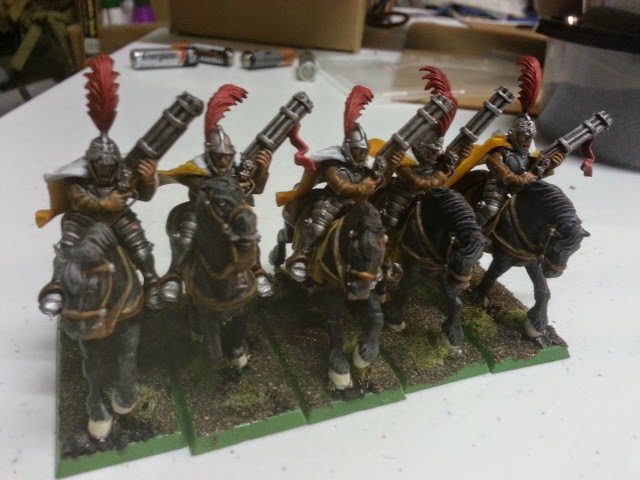 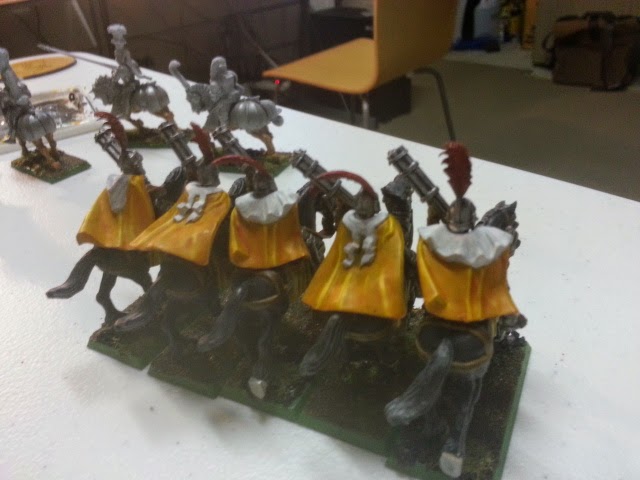