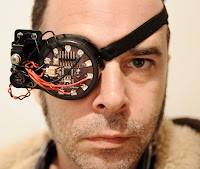 After being rudely awoken at a pleasure house and being hit with a horrendous hangover, the last thing I needed was to look out the window into the pre-dawn gloom and find two Xenos forces hacking each other to pieces. That said, it made for passable entertainment over breakfast. Let me regal you with this tale of Xenos aggression, which frankly is to be expected. Xenos will be Xenos after all. 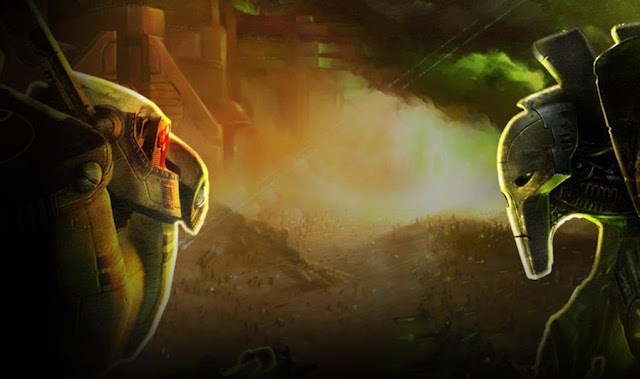 So without further ado, over a rather tasty cup of tea accompanied by surprisingly well cooked eggs, let me begin. In the red corner, well....to my left at least, stood a horde of Necrons. A couple of rather nasty looking Wraiths were floating about snipping bushes. Behind them some sort of floating gun platform hovered silently, and in the distance a rather mean looking horde of Necrons were busy marching in lines. In the blue corner, may as well continue with the analogue, a rather colourful host of Tau were digging in. Neat firing lines were being constructed across the length of the garden. A few of those robot things were jumping over the equestrian hurdles, rather enjoying themselves if I may say so. 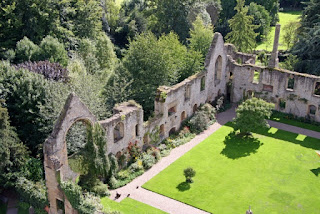 Some sort of shout went out from the Necrons and they advanced into the darkness towards the Tau. Green and blue bolts of energy arced out towards the Tau culling quite a few in a impressive display of firepower. Not to be outdone the robot suits jumped forward and after bright marker lights were painted on the wraiths, they were able to alpha strike the angry wraiths, melting them down to slag. The decorative walkway they were in was now thoroughly ruined.

A shadow streaked past my window, scaring the pants off me.....ok so I hadn't got dressed yet, but still, if I had been wearing pants, I would have been scared. A green glow followed a blob of heavily armoured Necrons appeared in front of the Tau robots. They gave an arrogant wave to the robots, then proceeded to kill all of the Tau behind the robots that were trying desperately to dig deeper hole to hide in. The horde of Necrons continued to march forward  though a few would need additional parade practice after they stumbled over a few rocks. More green blasts, more dead Tau. It was not looking good for the Tau, I'd give them 7:3 odds of being wiped out.

Adding some delicious home-made chutney to my toast, I watched as Tau marker lights painted the flying shadow. Without pause the robots pummelled the shadow with missiles and it exploded mid-air, quite a good fireworks show. Not sure what happened next but about half of the Necrons just fell over. It may have been the cascade of blue bolts being fired from the Tau, but I always thought Necrons were tougher than that, disappointing to have such expectations shattered.

Adjusting my zoom I was able to see that the Necrons had stopped on what looked like an old emergency beacon in the middle of the gardens. Not sure what that was about but clearly it meant something to them. The floating gun platform floated forward and in a bright flash vaporised the last of the brave, but now dead Tau warriors. It is proper to speak well of the dead, even if they are Xenos. However it would appear that the Tau warriors were the least of the Necrons problem. The jumping robots landed very close and continued a brutal firepower demonstration on the resting Necrons.

I saw the Necron Lord look about, wave his staff at the Tau robots in what I assume was an angry gesture. A dark green flash and the Necrons vanished from the gardens, even their dead and broken warriors. All that remained were trampled flowers and broken paths, I never liked those paths. The Tau on the other hand did not seem too happy about now securing the garden. It wasn't much to look at now and their were no Tau Warriors to do the clean up  A rather unhappy set of robots started jumping about the gardens clearing debris.

Standing up to stretch I had a rather awkward moment with a Tau robot staring at me through the window. Now I am not too worried about modesty, but it was a Xenos robot. Who knows what they get up to! Closing the curtains I finished my cup of tea and decide to compose this missive in the bath. Rather friendly company joined me, which has delayed this transmission. To my readers, your adulation is always appreciated. Don't fear if there is action in the gardens, I will let you know!