Like a green wave the Ork horde crashed against the walls of the Palace of Peace. The Orks had raced almost with a straight line of march towards the Palace since entering the city. Fortunately the defenders had yet to be attacked and while stretched thin, still had their fortifications intact. 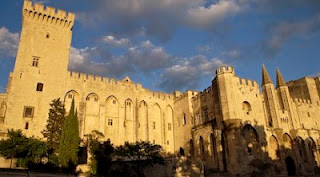 The angular sections of the Palace walls provided excellent positions for overlapping fire, if the Orks
followed the path of least resistance. Two heavy duty bunkers were placed either side to help channel the Orks into the kill zone. Once more the Palace Defenders sallied forth to defend their holy Palace.

The Orks wasted no time in ignoring any tactical appreciation of the battlefield. Seeing the Stormtroopers holding the bunkers they raced directly forward in their trucks and battle wagons to close the distance, ignoring the open ground completely. The ominous thumping of Tin Canz stomping through the city brought three ugly silhouettes into view. A bizarre thwack-whoop-clank also echoed along the walls as some sort of flying Ork contraption lurched around the tops of the wrecked buildings adjacent to the walls.

Once sighted the turrets and missiles of the defenders volleyed forth, crippling and wrecking the Ork transports. One of the Tin Canz gave a pop and collapsed as a lucky grenade found its way into the control box. 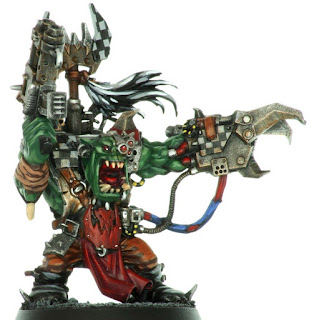 Ork trucks had done their job, despite being wrecked, and the mobs of boyz descended on both of the bunkers. On the left flank the Warboss ravaged the bunker with his power klaw, cutting power and fuel lines causing a internal explosion to collapse the entire bunker, leaving only  a handful of survivors. On the right a rather mean looking Nob tried to imitate the Warboss, however only cut a gas line and smashed some of the walls away. The Stormtroopers inside survived the damage, however the gas was disorientating them. A fast Ork bike zoomed its way around the exploding bunker to fire rockets into the side of the predator, luckily they only managed to scratch the armoured plating of the vehicle.

Aware that if the Tin Canz reached the walls it would not take long to cause serious damage, the turrets and missiles targeted them once again, causing another to be cut in half by lascannon shots. The remaining Stormtroopers began hunting the Ork mob that had destroyed their brethren, bringing their flamer into range. Orks burned, however the Warboss just snarled and ignored the annoying Stormtroopers. On the right, still overcoming the gas only a handful of orks were able to be brought down by lucky lasgun shots. Not willing to take any more lucky hits, the predator turned and melted the Ork warbike with its lascannons. 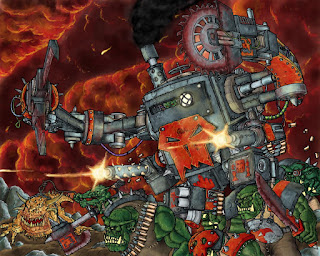 The Ork Warboss gave a WAAAAGGGHH! and Ork mobz charged at the walls. Power klaws ripped holes into the walls causing severe damage, but unable to bring down a section of the wall. Knowing that if the Orks got into the walls they would never be able to get the out, the defenders focused all their fire on the mobs underneath their battlements. A lucky grenade dropped by a Space Marine above them saw the Nob within the boyz on the right finally collapse in pieces at the base of the wall, no longer a threat. On the left a torrent of fire was levelled point blank at the Warboss and his boyz. Slowly they were whittled away until just the Warboss remained. Looking like they were out of weapons to shoot at him the Warboss gave a roar and prepared to rip into the walls and through into the city. With a "Oi, you dropped this", the Stormtrooper Sergeant that had been ignored by the Warboss tossed him a Krak grenade, which promptly exploded, toppling the Ork.

It was a close call for the defenders, most fortunately the walls remain intact, however the casualties amongst the Stormtroopers will not be able to be replaced if the Orks try again. The Emperor Protects.

Reporting from the Palace of Peace, Gregor Mundst.