Caveats: Report submitted by burst transmission by correspondent reporting behind siege lines within the Palace of Peace
At 0315 hours the Dark Angels commenced their assault upon the South Western corner of the Palace of Peace. Due to the scale of the Palace defenders were unable to consolidate in equal force and were forced to rely on the automated defences and thick walls to aid in repelling the attacks. 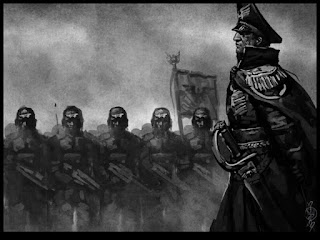 This sector was manned by a Tactical Squad of Ultramarines sworn to protect the Palace and two Squads of Imperial Guard Stormtroopers led by the Imperial Hero Commissar Cain. A Predator and Dreadnought were on hand to supply armoured support. The Palace of Peace boasts significant armoured walls that are regularly bolstered by turret defences capable of automated fire.


Attacking through the darkness and the rubble strewn approaches the Dark Angels were able to establish firing points on to the Palace walls without detection. A lance of light from above signalled the arrival of forces by teleportation. The barrage of fire commenced immediately. 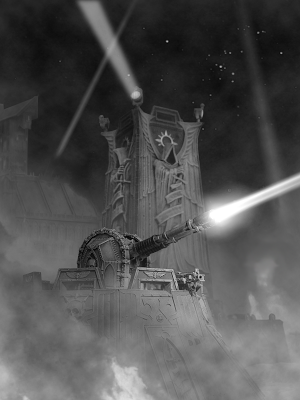 The defenders were able to pick off some of the attackers as they approached however the squad of Deathwing Terminators were causing havoc within the defences. A point blank krak missile managed to slip past their defences as kill one of the terminators, however the fusillade of bolter fire could not damage them. A wildly piloted Dark Angel Landspeeder streaked towards the wall turning at the last moment, leaving slight gouge marks in the wall from stabiliser wings dragging along it. The desperate flight enabled a multi-melta to target the rear armour of the predator, which exploded in an inferno.

The Dreadnought was able to crush one of the Deathwing before a chainfist cut through power couplings and disabled him permanently. The whirlwind turret continued to barrage the advancing Dark Angels, whittling their forces away. A volley of Krak grenades from the defenders managed to land one within the pilots seat of the rogue Landspeeder which promptly careened into the ground in a fireball.

Our brave Commissar Cain in a valiant effort to plug a breach in the wall that had been made by the thumping of thunderhammers upon it engaged the Deathwing terminators in single combat. The odds were fair that Cain was not going to win, however he only needed to delay them long enough for reinforcements to arrive, forcing the Dark Angel commander to withdraw.

Using the only advantage he had, being much less armoured, Cain snaked his chainsword through the arms and legs of the terminators as he dove about trying to find a weak point. It was truly a sight to behold from the battlements. Possibly out of desperation  Cain jammed the end of the chainsword into the power vents on the back of one of the terminators. He must have hit something critical because the terminator stopped moving completely, frozen without power. A cheer went up from the dwindling Stormtroopers who were still trying to halt the advance of the Dark Angels.

Whether it was seeing the Deathwing delayed, or the casualties caused by a recent Whirlwind barrage, the lead Dark Angel squad moved into close cover to continue their fire. The exchange of fire intensified between the two now rather uncomfortably close forces. The assault was almost upon the defenders.

With a mighty whack, Commissar Cain went flying across the ground slamming into Palace Gates. One of the Deathwing raised his Thunderhammer in salute before turning back to the walls to continue the destruction. Crawling along the gate Cain was dragged back into the defences through a small courier door to receive medical attention.

The Dark Angel assault was rapid and merciless as they jumped the defence lines. The Deathwing targeted an armoured turret section causing a massive explosion within, leaving it a crumbling ruin. All looked grim for the defenders, survival was not possible. 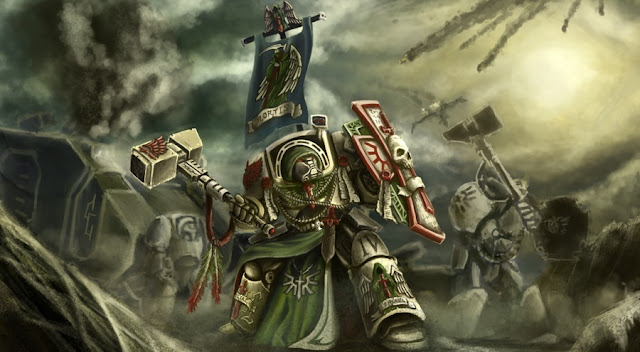 At 0546 hours the assault stopped. Dark Angels in mid assault simply paused, then began controlled withdrawals back into the cover of the ruined city they had emerged from. The remaining Deathwing simply looked through the breach in the wall then vanished in a spark of light, teleported away. The defenders took a while to realise that it was over. A few cheers were quickly muted by looking at the damage to the fortifications. Next time the Dark Angels attacked it would be a lot harder to fight them off. Medics from within the Palace began moving forward to tend to the wounded and claim the dead. Volunteers began the slow process of clearing debris.

In this reporters experienced opinion the defenders will hold out against another assault. After that, only the Emperor knows.

Reporting from the Palace of Peace, Gregor Mundst.
Posted by GuessRange at 22:55