Okay this little part of the 4th Company was designed to complement the overall feel of the other elements going into the company. By this I mean, there are no other bikes, so I am not going to take scout bikers and there had to be some form of long-range/fast scouting/travel available. I found that Landspeeders provided me the best solution to this, and potentially if I had some flyer elements in later will provided the start of a cohesive aerial-support force.

Now I already have one Landspeeder which I painted up to 'prove' the process before I jumped doing all of them at once. However this was an older kit so there were some differences that provided challenges. These models look great once they are done up, and are very flexible on the battlefield. On we go...

An ongoing process I am using for my vehicles is to undercoat them on the sprue. This ensures that I get a undercoat on 99% of the model, not just the visible parts. This make it a lot easier to paint in a non-assembled/semi-assembled method and when putting it together you don't find spots on the model which have been unfortunately missed.
Once again I am using a Skull White spray undercoat on all parts of the model.
When complete, I clip all the parts off the sprues. Then begins the laborious task of cleaning up mold lines, sprue scraps etc. I really don't like this part of the hobby (I don't think anyone does!). However, once we get past this stage, everything becomes far more interesting! Assembly and painting now possible without finishing the model and finding embarrassing plastic lines where there shouldn't be (ok sometimes one or two slip through...shh..).

On the Landspeeders there is actually very little that can be assembled without causing difficulty with paint, however the parts that can are: The weapon components can be put together, the dashboard can be put on the roof frame and the guide lights/underslung harness can be put on the base. Looks something like this:

Essentially this is blocking out the major colour areas prior to going through and adding detail/highlights etc. Less focus on perfection and more about coverage/consistency of the paint scheme.

This is mostly done in the above step, on these Landspeeders the only other colours are the leather chairs these based with Mournfang Brown. The green aquilla on the front has a Caliban green base. And Mephiston Red is used to base any red lights/buttons/targets that need to be picked out. Not a large colour palette on these models.

A generic base coat for the metal at this stage. Add some touch of water to the brush to allow the paint to spread easier across the larger flat surfaces.

There really is only a few detail spots that get the extra colours. On the leathers seats, Skrag Brown is used to add some depth to the colour. A lighter shade of green is used on the upper parts of the aquilla. Khorne Red is used to brighten colour on the red spots. Some parts of the metal also receive a coat of Nuln Oil if they are too bright/don't fit the rest of the overall metal look.

This is an ongoing process. I should probably be a neater painter and avoid this completely, however balancing speed of painting versus small mistakes is a constant challenge.

This is where the main body of the Landspeeders is assembled to provide the rest of the frame for detailing, weapon placement, and crew attachment. The stands here are just attached to provide and indication of completion. This model really comes together quickly once its bits and pieces are made ready to go.

I am using the same marking scheme from the first Landspeeder I painted up as the concept scheme. So a simple Chapter Marking, Company Number, and Assault member allocation is detailed. Nothing too fancy, no hand-script or anything. There is certainly space for finely detailed work to be done on the model, however that is something I would will schedule for later/if at all.

Step 8 - Assembly
Just a quick note - the crew follow the same painting pattern as any of the other members of the company, so have Chapter shoulder pads, markings etc. This is to have all models in the army synch together once its complete, to create a cohesive whole.

In addition to the above details I have magnetized the under-slung  pintle and doors to provide me the best flexibility of options - this will be the general theme for all of the other vehicles I will be putting together. 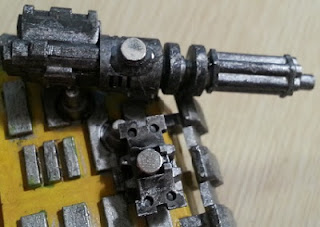 These two pictures show the pre-finished magnets on the weapon mounts. I wasn't sure about the magnets till later, but they probably would be better sculpted into the areas earlier in the assembly - lesson for next time. These are using 3mm x 1mm magnets. 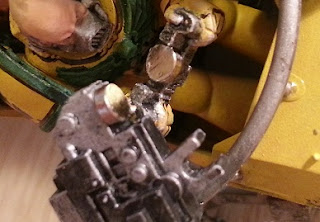 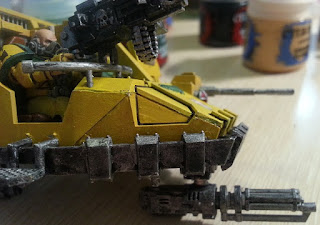 This shows the profile the magnets add to the weapon mounts. Nothing too outrageous. The pintle weapon does clip down onto the slide-frame, however I left it free to demonstrate the magnet angles. 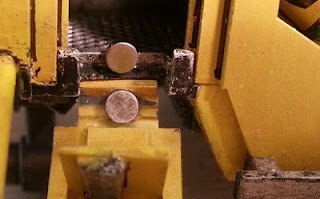 These are the magnets used on the door frames. They support the Typhoon Missile Launcher weight easily. The trick with these is to get the angles right on the door hinge so that is is always 'pressing' in towards the frame in order to complete the connection with the inside magnet. A further trick is to make sure that all the doors/weapons are interchangeable - ie all the magnets are set up so that they all work together and you can hot-swap weapons as required to adjust for the future. 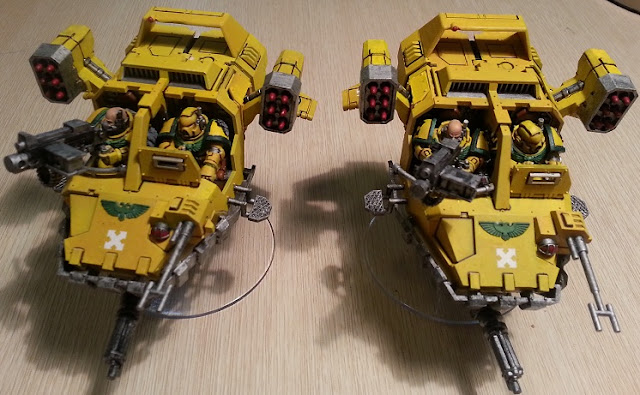 And this is the finished Landspeeder Squadron! (Huzzah!) 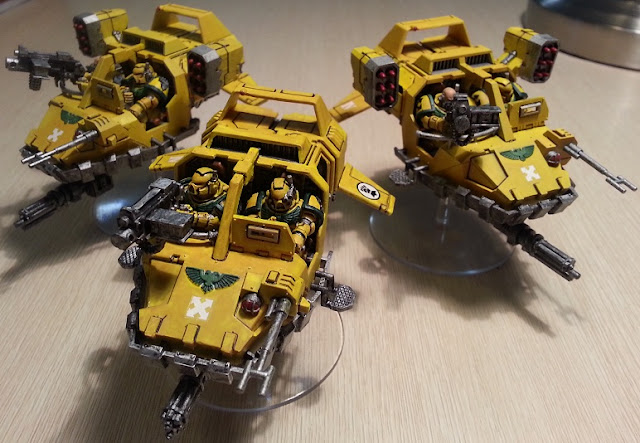 Well we finally got there but they are all done now. In the future I may buy some spare Typhoon Launcher parts so that potentially I could kit out all three at the same time. However, until I finish off some more of the core Company elements I will put that on hold. At this stage the last Assault (Fast Attack) element to be painted is the second Assault Marine Squad, so they will get precedence.

Thanks for reading, I hope you noted my mistakes and ways you can do things better! It is all a learning process.