Every Battle Company is decreed to have two Assault Marine Squads as part of its force organisation. Often these are actually employed in five man squads in order to provide maximum flexibility to the Company Captain.

For the Imperial Fists 4th Company, the Captain is all about taking the fight to the enemy and will often deploy alongside a personal bodyguard drawn from one of the Assault Marine Squads. The plan for now is to finish the two full squads with basic equipment before moving onto specialist models. These will either be special weapons (Plasma or Melta), as well as up-kitted Sergeants with Powerfists or Lightning Claws.

At this stage I am in the process of finishing off the first ten, however due to some zealous modelling a few years ago two of the models (previously used as Sergeant I think) are kitted with dual swords/axes.

The painting process is no change to the basic infantry painting. It is easier to access some areas, harder to reach others, but otherwise is exactly the same method. For the Assault Marines, from start to nearly finish looks like:

The two Sergeants are currently: 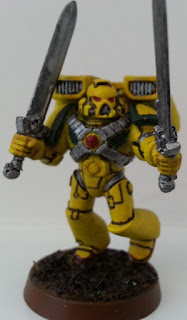 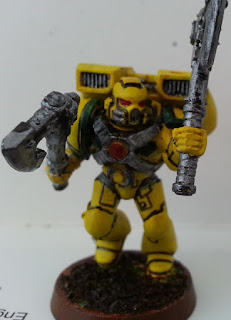 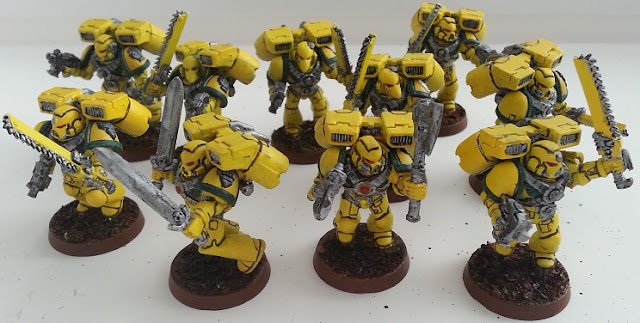 Once I get a start on the painting some of the other squads I'll be getting started on painting the second Assault Marine Squad. Once they are completed I will update this post with the final results. These are what I consider battle-worthy/table ready paint jobs. It is the overall look I am working towards, not master-class brilliance on the models. Perhaps in a few years I may revisit-redux the models up to a better standard (if my painting improves..)